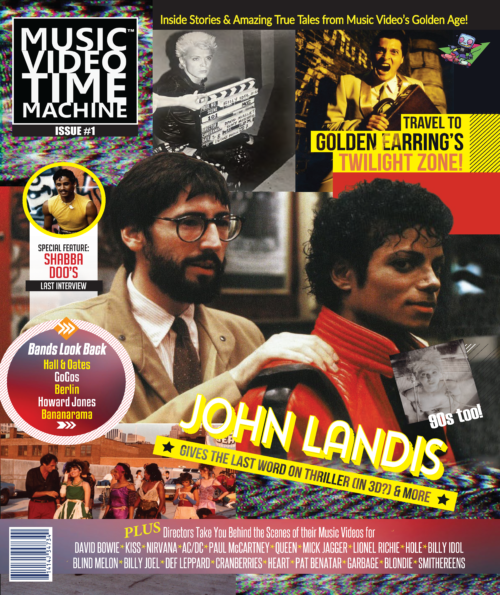 MUSIC VIDEO TIME MACHINE now lends its name to an online publication completely dedicated to the Golden Age of Music Video (1976-1994) now distributed online across multiple outlets, including MAGZTER and its own website https://musicvideotimemachine.com.

“During a brief period in entertainment history, the music video evolved from an uncertain marketing tool into a pop culture phenomenon,” explained music video historian and entertainment journalist Stephen Pitalo, editor and publisher of the new periodical. “The Golden Age of Music Video is book-ended by two important moments: the triumph of Queen’s groundbreaking “Bohemian Rhapsody” video in 1976 and the conclusion of a multimillion dollar trilogy of Guns N’ Roses Use Your Illusion videos in 1994. Each issue of this quarterly features my exclusive interviews with the era’s most notable music video directors and musicians, behind-the-scenes photos, and more information I compiled that chronicles the adventures of those talented bands and directors who advanced the genre during its greatest era.”

Issue #1 features an exclusive interview with filmmaker John Landis on directing Michael Jackson’s Thriller, its lasting impact, and his significantly different experience shooting Jackson’s “Black or White,” along with helming hit music videos for Paul McCartney & B.B. King. Also, a special Q&A with the late Adolfo “Shabba-Doo” Quiñones, the godfather of street dance, shines a light on his influence in the music video genre and pays tribute to his legacy.

Issue #1 also includes exclusive Q&As with six other directors who shot music videos for hits songs from this era:

Dave Robinson (Madness “Our House” “It Must Be Love,” Tracey Ullman “They Don’t Know”)

Artist interviews in this issue include John Oates of Hall & Oates, Karen Valentine of the GoGos, Terri Nunn of Berlin, Keren Woodward of Bananarama, and Howard Jones, who all take the reader behind the scenes of their most famous music videos. The videos for Golden Earring’s “Twilight Zone,” the Smithereens “Time Won’t Let Me,” and Bob Dylan’s “Subterranean Homesick Blues” are also re-examined through interviews with the filmmakers.

“Each issue will also have specially dedicated sections, such as landmark videos & the legendary filmmakers behind them, independent video channels & programs from that era, and our My Five Faves column, which features someone’s top five favorite videos each time,” explained Pitalo. “This time we have “Johnny, Are You Queer?” singer Josie Cotton picking hers.”

More content, such as unique one-on-one video interviews and vintage blog features, can be found by clicking on BLOG or BONUS CONTENT.