How Parties, Bollywood, and Paul Newman Shaped Huey Lewis and the News’ “Heart & Soul” and “I Want A New Drug” Videos

How Parties, Bollywood, and Paul Newman Shaped Huey Lewis and the News’ “Heart & Soul” and “I Want A New Drug” Videos 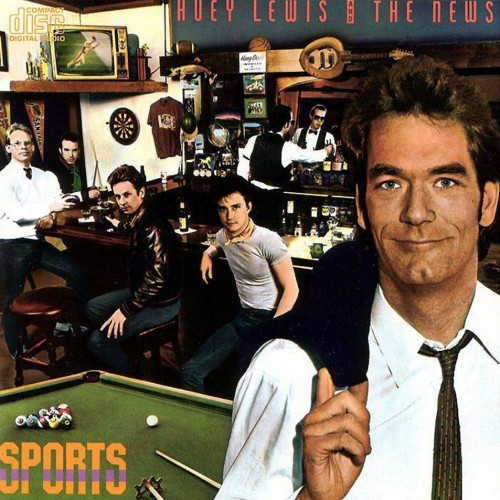 With Huey Lewis and the News out on the road celebrating the 30th Anniversary of their hit album Sports, the Golden Age of Music Video takes a look at the videos for their top ten hits “Heart and Soul” and “I Want a New Drug”. The videos follows Huey, MTV’s favorite Joe Everyman/RockStar, just trying to get the girl at the party, or make it to the gig on time. The video’s director, David Rathod, recalls a few stories about shooting these big hit videos.

GOLDEN AGE OF MUSIC VIDEO: How did you and Huey Lewis end up working together?

DAVID RATHOD: I was in L.A. and decided to move to San Francisco. I was editing here in San Francisco, I liked it here versus L.A. I met Huey at a Lucasﬁlm Christmas party he was playing at. It was just before his big album Sports was released. We just hit it off talking, and I was actually interested in him as an potential actor for a feature ﬁlm. I was talking to him about that, and after that, he asked me to do a music video for him. It was so early in the process of making music videos, so I just thought of it as kind of a lark – at ﬁrst. Once we started talking about it and thinking about it, and so on, it got really exciting for me.

GAMV: There was a book that came out in 1983, just prior to shooting those videos, and Huey said he’d had a not-so-good experience on the videos for the prior album. He said they put too much makeup on him, and it was not fun.

DR: His interest in working with me was from just talking to me. He knew that I wasn’t interested in that type of thing. He wanted something that had, well, a little more soul!So that’s how the connection happened. He knew from talking we were on the same wavelength.

GAMV: He also said that he was writing songs for the new album, and couldn’t help but think about what the videos would be for the new songs, including “I Want a New Drug”. He really had his ﬁnger on those things, and you were able to make it come true.

DR: I think there’s some truth to that. I mean, he’s not a ﬁlmmaker, and so random arbitrary ideas are easy to come up with, but the fact that he (number one), knew what he didn’t want to do, like on “Do You Believe In Love”, and (number two) and he had some ideas of things he wanted to do, and his manager Bob Brown had some ideas. And Huey was a big fan of the Paul Newman movie Harper, and that persona ﬁt what Huey was all about right then, in combination with the hard-drinking private detective thing. And that was the feeling underneath “I Want A New Drug”, the vibe. Then, it was up to me to come up with a framework, which would make some kind of sense for a video. We talked a lot, but I had two friends of mine, Jim Block and Ned Miller, who are writers and good friends, and we kind of kicked it around and tried to put it into a one-page script, if you will. 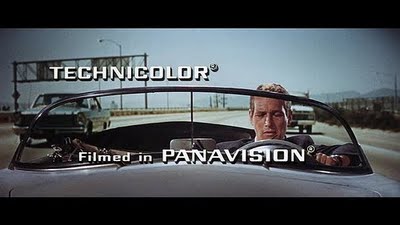 Paul Newman and car in the film Harper

GAMV: How did you know them?

DR: Frankly, it was a little like a band, I had those guys and the cinematographer, Chris Tufty, was an old friend, and my wife at the time was our art director. I felt in a way I had my band, if you will, so we could just take the song, and with my band, put together some videos.
GAMV: The ﬁrst video you’re going to do is “Heart and Soul”.

DR: Exactly, “Heart and Soul” is the ﬁrst one.

GAMV: Huey seems like an everyman, developing this visual presence of being just a rock and roll musician but a regular guy, just trying to get through whatever is befalling him.

DR: Right. Because at the time, a lot of the stuff was that rock excess stuff, you know, the rock gods, the arena bands, and all that. That was still pretty big and pretty popular. I think maybe when he’d done the previous videos in L.A., they may have been thinking of him in some big way like that, some polished way, and that’s not the direction he wanted to go in. So in “Heart and Soul”, the idea there is that this everyman walks into a Fellini-esque party where there’s all kinds of people who were freaky and unusual and odd, at least for the time, and he’s just trying to make his way through that, and in the course of that he sees this girl, who is beautiful but relatively normal. (laugh) And that was the anti-“big rock” thing he was all about, which at that time, was kind of refreshing. 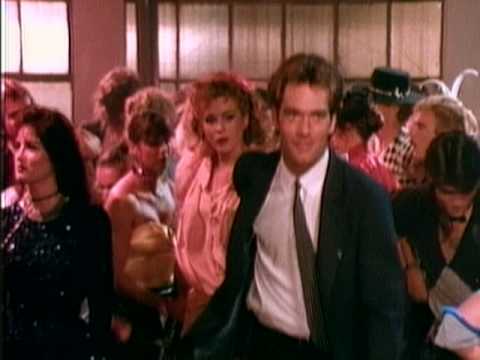 Huey gets the girl: a scene from the “Heart & Soul” video

GAMV: Looking back at it now, it has a subtext: here’s this guy and his bar band, doing their job, trying to put out good music and play well live, it’s the same as a guy who walks into a party and just wants to meet a girl, but he has to go through so much b*llsh*t.

DR: Yeah, trying to be true to yourself. Exactly. Doing what you want, doing what you love, and that’s where they were in their career. Their ﬁrst album was actually pretty good, pretty punky, and I really liked it. Then the second album, where “Do You Believe In Love?” came from, they had fallen under the L.A. sway, and it was produced in a bigger way, and it was polished, and there was some professional songwriters and producers brought in on some songs, and [Huey] felt that just wasn’t where they wanted to go. Sports was where they came back. They produced it themselves, and they carried that philosophy forward into the videos. They were just not going down the L.A. road.

GAMV: Even the cover of “Sports” is telling. They’re sitting at a bar, and Huey has a sportcoat thrown over his shoulder, smiling as if to say, “This is who we are.”

DR: Right. Exactly. That’s a bar in Mill Valley, California, called the 2 A.M. Club, and that’s just them being who they are, being true to themselves. And that’s what we tried to do with the videos. Now, going back in my personal life, I’m half-India and my father is Indian. I grew up in Bombay for ten years, I moved to the United States when I was fourteen. Back then, I saw a lot of Hindi movies, now called Bollywood movies, which have a lot of songs in them, so I grew up with musicals. The main things that I saw were musicals, so when the music video genre began to emerge, I was thrilled, because that was my favorite part of movies as a kid. The music video thing felt natural to me. The word “musical” is a little more accepted now, but music video was adifferent thing, so what I wanted to do is bring the vibe and energy that can be in Bollywood musicals into this rock thing, and by that I mean, there are basically two types of Hindi movie songs. One is the big production, with lots of dancers and huge, gorgeous locations, and over the top everything. The other one is kind of grounded in reality, where it’s a poetic depiction of the person’s world, and the second is where Huey and his persona made sense.

GAMV: On “I Want A New Drug” — of the two videos, that’s the one that makes us believe he’s a workingman’s rock star, in comparison to everyone around him. When he’s on the boat shaving, we’re on his side, he’s living this rock and roll life.

DR: Yes, that’s a good point. I hadn’t literally thought of it that way.

DR: Exactly — how’s he going to get there?

GAMV: Did you come up with the face in the ice?

DR: Actually, I think that Paul Newman sticks his head in ice water in that movie, but I just took it a step further and shot it from the point of view of the bottom of the sink.

GAMV: I know this is a long time ago, but do you remember how many takes you had to do of that?

DR: You know, I do remember, because it was just so wacky. It was done at 8am, or some totally non-rock and roll time, and because I wasn’t exactly sure what part of the piece of the song we would use, we did the whole song that way, all the verses and choruses. Maybe all the song, or maybe we just shot half of it to conserve. I remember because at the end of the scene he said, “My eyeballs are freezing.” He’d stick his head in, sing two lines, grab a breath, and the camera would roll because we never cut, and then he’d dive in again, sing two or four more lines, come out, take a breath. I wish I had the dailies of that, because it was just an interesting three minute single take of him doing the whole song! 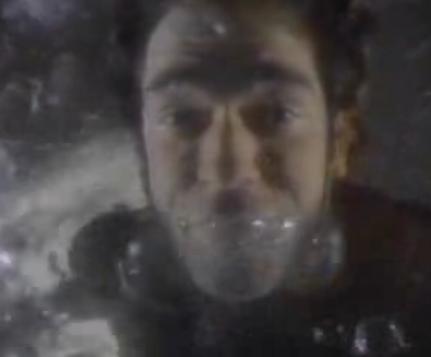 Ice Ice Huey: a scene from “I Want A New Drug” video

GAMV: What were some of the other logistical challenges of doing this?

DR: In those days, I was so new to the whole thing, I was so excited and thrilled that they wanted to do a music video and that I could do one, and it would be so much fun, that many things were not properly and professionally thought through, and it worked out! (laugh) For example, in “Heart and Soul,” there’s that big party. Nowadays, it would be extras and the cast would be paid and so on, but all those people were friends. Everybody was someone’s friend in that scene. No one was paid, and it was like a party. We started lighting at eight in the morning, people started showing up about 2pm, we started lighting people, then more around 7 or 8 at night, and many of them stayed until 1 or 2 in the morning, and by 3 or 4 we were done. There was almost like a college-student energy to the project – “let’s just do this” (laugh). It was exciting.