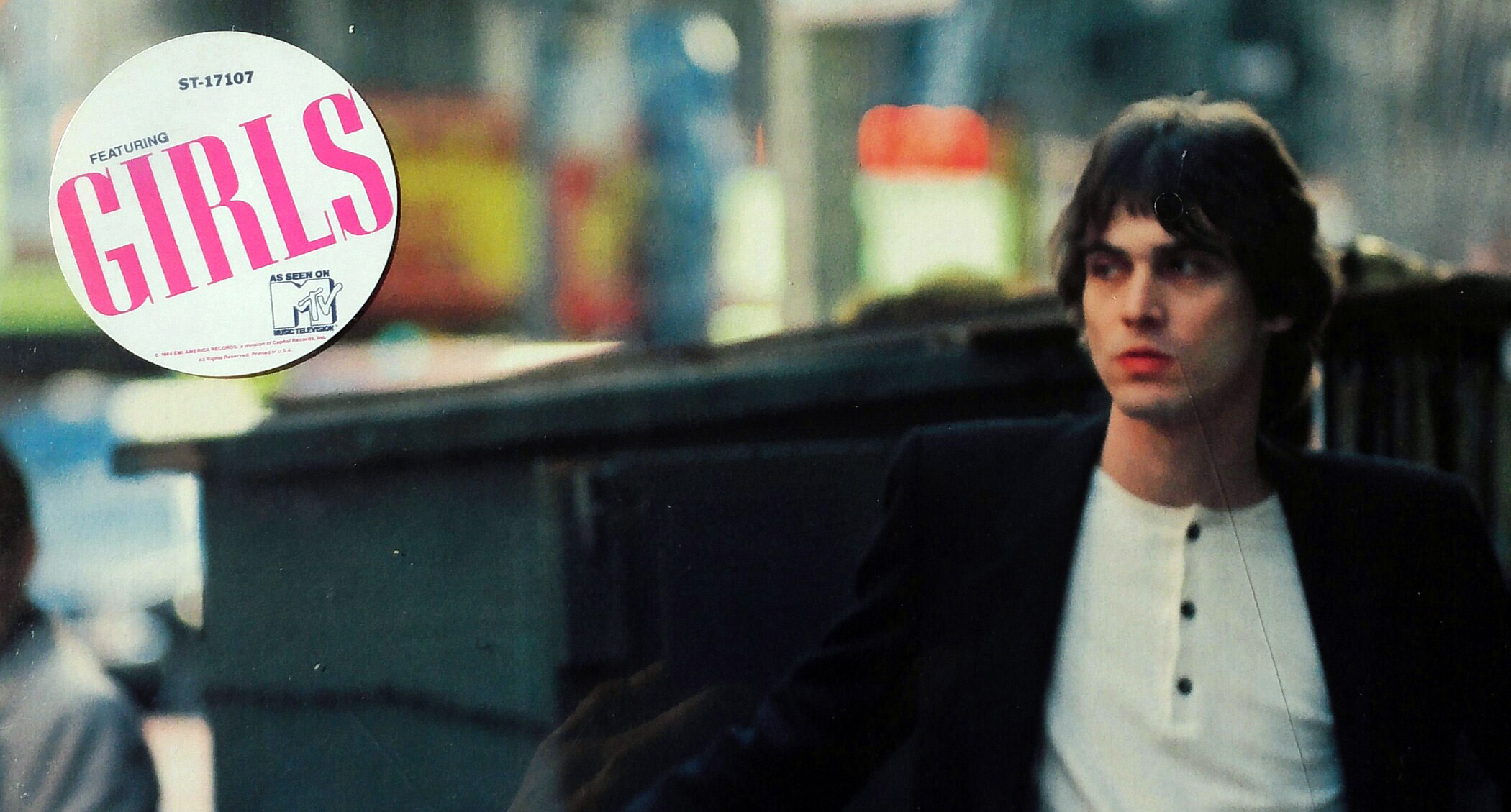 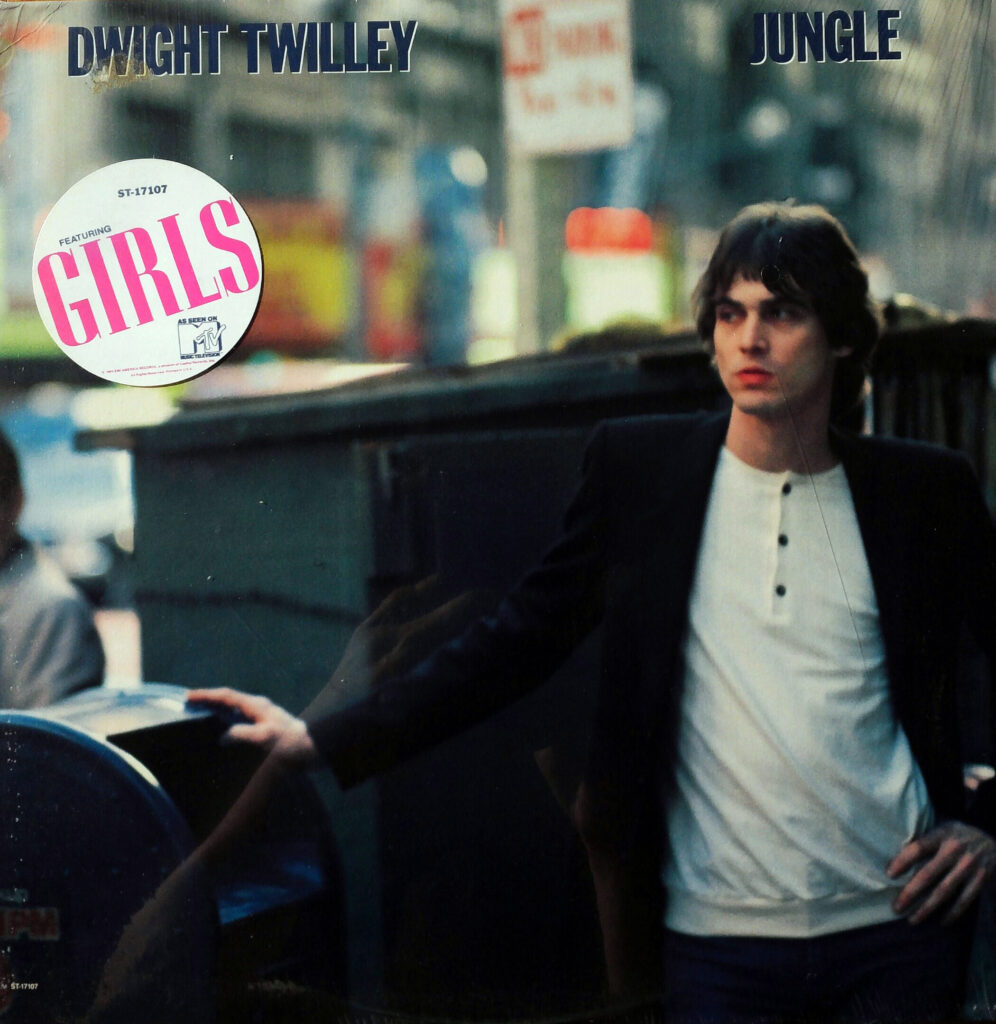 Power-pop legend Dwight Twilley broke through in 1975 with the Dwight Twilley Band & the hit “I’m On Fire ” (1975), but he also penned “Why You Wanna Break My Heart”, which was featured in the 1992 motion picture Wayne’s World (1992) as sung by Tia Carrere. Music video fans, however, remember his big 1984 ode to the female known as “Girls” and the accompanying Porky’s-tribute music video: a fun high school romp complete with nutty high jinks, silly asides, and equal opportunity nudity (if you were privy to the rated-R version). Most recently, Twilley released the critically acclaimed ”Green Blimp” in 2010, and “Soundtrack” followed in October 2011. In the summer 2013, his song “Lookin’ For the Magic” was prominently featured in the horror film You’re Next.

We caught up with Twilley at the Brooklyn Power Pop Festival, part of his 2014 East Coast tour, and asked him a few questions about the “Girls” video.

When did you write the song?

DT: When I wrote the album Jungle, I had most of the songs. I usually head into the studio and write a song, and then another, but on this I had most of them. I had been doing it in a little studio way out in Los Angeles called Studio No. It was called that because “did you get anything done last night?” “No.” (laughs) I came up with the song with the idea that it’s just so simple, the idea of girls, almost as if if were an idea that had passed everybody by. I heard a lot of songs written around the idea, but not one directly about girls. I kind of went around asking people — “What is all this about? What can you really say about girls?” I actually went to a few other little studios before we recorded at Sound City. I think it was ’83. We were shooting the video at Christmastime before it was released in ’84.

Who came up with the video concept?

DT: The director, Mark Robinson. It was campy, and a lot of people were doing spoofs of films and whatnot. It was based on a Porky’s-type theme, and the way it really came about was that I had done a one-hour MTV special, one of the first ones, in 1982, just when they were starting to bubble up. By the time I had the album Jungle coming in 1984, videos had become really important. It could really give your record life. I was thinking that I’d like to have a video, and “Girls” had already been chosen as the first single. Unfortunately, I didn’t have anything in my contract for a video, and they were getting pretty expensive at that point, and I didn’t have a leg to stand on, you might say. Couldn’t really bang on someone’s desk, yelling “I want a video!” (laughs) So, I was signed to Capitol EMI at the time, and they had a conference room where their video equipment was, and there were people in there watching the videos for people on the label — J. Geils, Stray Cats, people like that. Sheena Easton, I think. So I’d walk by that room and see the suit guys with their cigars, looking at videos, jumping up and down at how much they did or didn’t like the videos, and so on. They’d be in there, but not all the time, so I decided that I would just go sit in that room; I would get up in the morning, and instead of heading to a studio because the record was done, I would head over there and sit in that conference room, playing videos. Someone would walk by once in a while — “whatcha doin’, Twilley?” “Well, I’m interested in videos, so I’m watching to see which directors are good, who’s shooting what,” and they’d say, “Oh, that’s interesting, good to see you” and they’d walk back down the hall. It started to get curious to people around there after about a week of me doing that (laughs) with Twilley sitting in there for hours looking at videos. So one day, one of the guys who has the strings attached to the moneybags popped his head in, and I told him what I was doing, and he knew that “Girls” was the first single, so he said, “Hey, man, we should do a video for ‘Girls!’” And I said, “You think so? What an amazing idea!” (laughs) So then it snowballed, and pretty soon we were prepping for the video, which is a huge expense in itself.

Dwight, before we get to the production, I know that you and Tom Petty and Phil Seymour were singing on each others albums. How did the idea for Tom Petty singing on the chorus of “Girls” happen?

One of the producers was Nolan Sharp, and he’d done our first two albums, so he helped put that together. Phil sang on some of Tom’s work, and Tom played on a song called “Looking for the Magic” which is now in a film called You’re Next. We were labelmates, and we’d help each other out from time to time. The first time he was on television was when he was our bass player on a show called “Wacko” in 1977. The TV show was produced by the guy who did Sonny and Cher, and the Elvis Comeback Special. It had really good camera work.

So when the video came together, how did Mark Robinson come into the picture?

Mark had done Tina Turner’s “What’s Love Got To Do With It?”, and I liked the way it looked, so the label pursued him and got him. We did a couple of videos together.

That’s seems like a winning combination: you used a Porky’s theme, and much of the MTV audience was high school then. Why did you guys do a version with nudity in it, knowing you couldn’t get broadcast on MTV with that type of cut?

I was getting to that. It was the snowballing effect, and we did a show for the Playboy Channel to spotlight the single. Soon there were feverish negotiations, and the cheerleaders in our music video were all Playboy Bunnies. Which was a goofy & kind of a fun thing to have. It was a fun video shoot! And it turned out to be a great promotional tool. Some of the label guys said they’d be out on the road, trying to get radio stations to add it, and the programming guy would have some reason why they didn’t want to play it, and then our guy would say, “okay, I’ll see you later, but how would you like your own copy of the “Girls” music video — the R-rated verison?” and I know it worked for sure in some cases. You have to admit, it was the right song to have a video like that.

How did Carla Olson of the Textones end up in the video lip-syncing Tom Petty’s part?

We were friends with Carla too. Same manager as Phil, and there was a blurb in one of the tabloids where someone had mistaken her for Tom Petty. (laughs) Long blonde hair, skinny, thin face, and some guy just wrote that as a joke. So we tried to take advantage of that.

No, she thought it was as funny as we did. 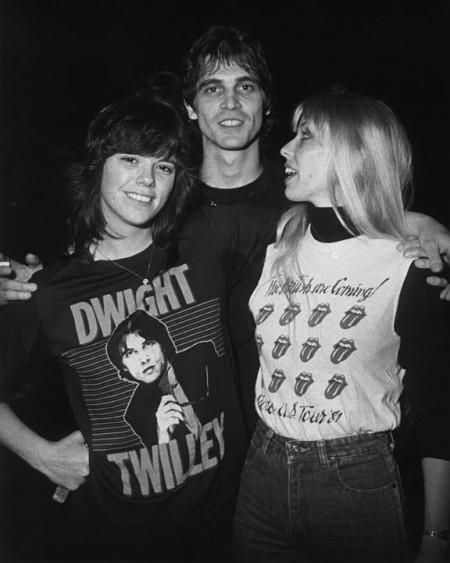 That’s one of the great things about this video — there’s so many little weird things in it, like the shaving cream commercial, and your back flip.

That was the great thing about Mark. He let us bring in some of our own ideas. The shaving cream and the flip were mine. And the football player out on the field playing for the little cheerleader? My idea! Yeah, and the squeal too! 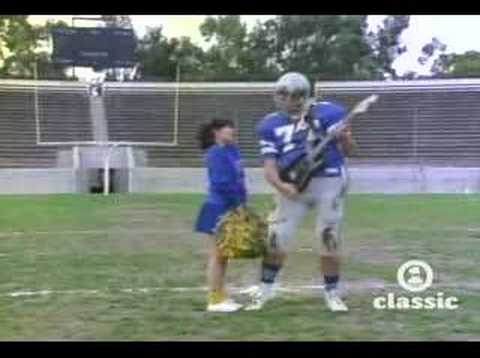 Where did you shoot it?

One of the little high schools outside of Hollywood. We shot it over the Christmas holidays so there were no kids there. It was a two- or three-day shoot. It was better not to have the kids around, especially with a bunch of naked chicks running around!

What’s your favorite moment in the video?

I’d have to say the football player playing the guitar. That was classic!

Of all the people that I’ve talked to lately, I’ve gotten more response from saying I was interviewing you about “Girls” than I can remember.

It was in heavy rotation for quite a while, so we were happy with that. It’s also playing at the beginning of the Rodney Dangerfield movie Ladybugs. His son is watching TV, and you see the “Girls” video.

Do you have any memories from being on the set? Are there any moments from shooting that you recall when you see it?

I guess that’s one for the vault!

I mean, naturally, it was…it was…I’m trying to put this diplomatically. It was…different. I mean, nobody really knew — I mean, when we started the thing, no one really thought that it would end up with all these naked people in it. In fact, the way that Mark Robinson handled the naked guys I thought was brilliant, too. He did a really tasteful job on that.

I think with all the press and all the stuff I ever did, I only had one girl who called a radio station and thought the video was bad — negative towards women, or something. I was telling her it was all in fun. If one person in a million complained, that’s not too bad. You know, they cut it off on the radio, but the beginning had a little intro that was “Thank Heaven For Little Girls”. It was on the album, though.

When people meet you for the first time, do they generally bring up the “Girls” video?

Not immediately, but it’s one of passing stones of history. It comes up pretty damn regularly. They’ll say, “I’ll never forget that video.” Maybe it was just silly enough.