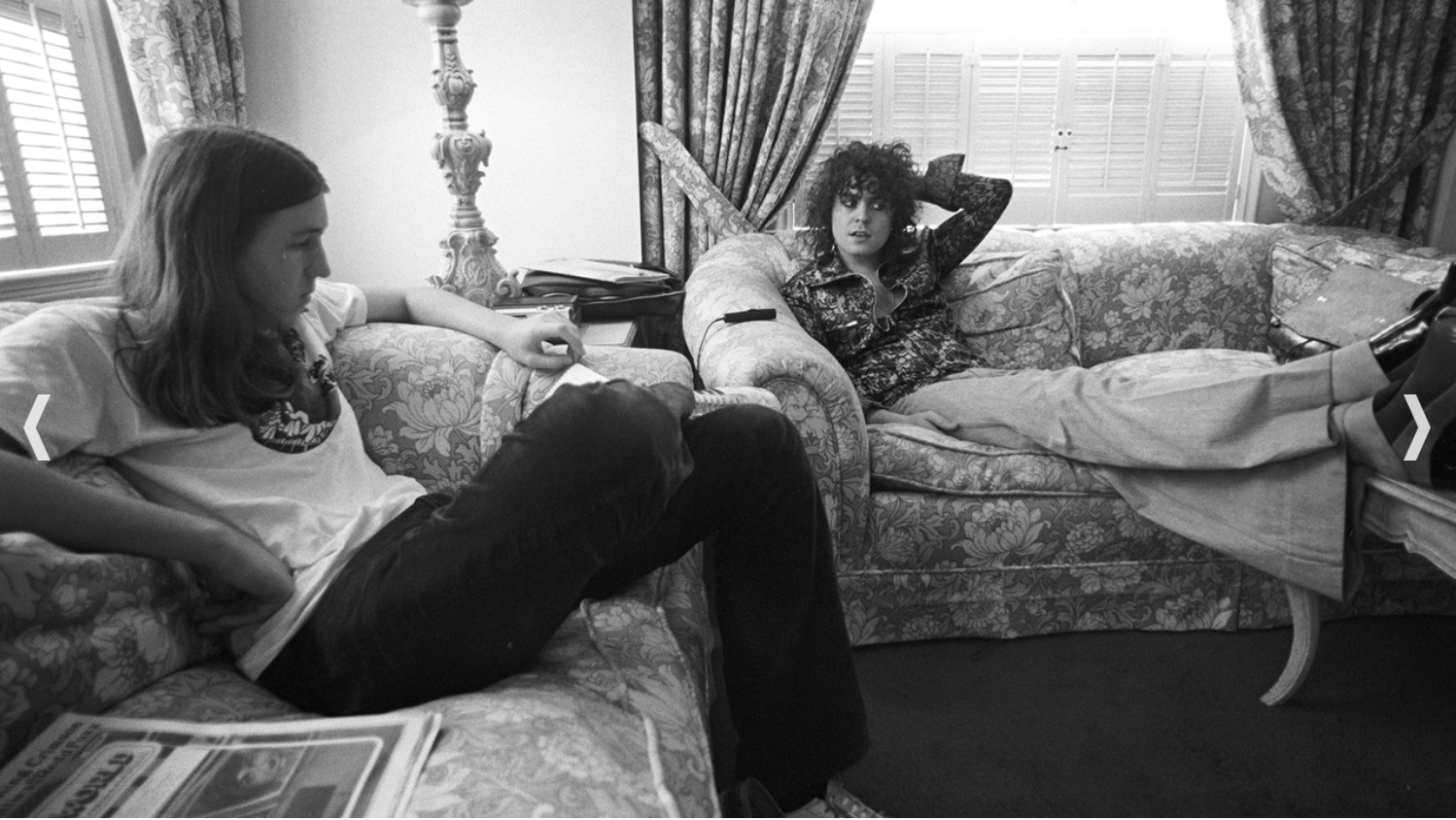 Whether you consider him the sweet soul with the roaring guitar, the feather boa strutter of glam rock’s ascension, or an early champion of punk, Marc Bolan had his head in the clouds and his eye on the future. However, for the T. Rex bandleader, success seemed out of grasp even at his pinnacle. Bolan is now heralded as ahead of his time, but in the 1970s, he fought for respect as a performer and songwriter in an age where David Bowie served as both rival and kindred spirit. A new documentary at this year’s Tribeca Film Festival, Angelheaded Hipster: The Songs of Marc Bolan and T. Rex, shows the craftsmanship behind the songs, as well as Bolan’s struggles, triumphs, failures and undeniable legacy. Director Ethan Silverman was involved in both the creation of this documentary and its impetus, the 2020 Marc Bolan tribute album. Silverman’s access to those who knew Bolan best as well as disciples of the glam god all come to bear witness. Bolan acolytes include U2, Billy Idol, Joan Jett, Ringo Starr, Nick Cave, and Elton John, all on hand to celebrate his work. Footage of the recordings and interviews are supplemented by archival footage to complete the diamond star halo effect, following Bolan’s life from his teenage years running the streets with Bowie to his tragic death at age 29. Music Video Time Machine spoke to Silverman about his experience making this film.

MVTM: How did you become involved in this album & documentary?

ES: Bill Curbishley, who’s my producing partner, once approached me about another project – a theater project – that he wanted to develop, and he wanted to use British songs from the seventies. He managed The Who, and he said, how familiar are you with Marc Bolan and T. Rex? I said, Well, I know “Get it On (Bang a Gong)” and he said, you should really listen to these songs. Now, in this digital age, you can do it very quickly, so I think I listened to every song by Marc Bolan and T. Rex, mostly because of how much I loved it and had not known the catalog. I could not believe what I was hearing, which is essentially everything in rock and roll for the past 40 years, and not that Marc invented all of the sounds and rhythms and so forth because he got things from the fifties and sixties for sure, but it was put together in such a way that I had not heard before, with that originality. I just couldn’t believe that outside of the UK, people didn’t know this work, and it goes way beyond “Get It On “Bang a Gong)” – it was really something extraordinary and I became obsessed.

So, we got busy with other projects and that project went away. And then at some point I said, why don’t we do a T. Rex tribute album, getting people to do T. Rex songs? And Bill said, Ethan, it’s a great idea, but nobody’s going to pay for that. I was frustrated. And then a week later, I said, wait a second, what if I film the making of the album, and we just have something to sell with the album? We get really interesting people, and Bill said okay, I can work with that, and that’s how it started. So it wasn’t, how did I get involved? It was the madness inside my brain that got myself involved. And I got so deeply involved in it that I just couldn’t stop.

MVTM: There seems to be a fair amount of time between the album and this film coming out. Was that just COVID or were there other obstacles to overcome?

ES: There were many reasons for that break, not all of which I can get into now. It’s an interesting story, but a lot of it was COVID. We lost the album’s producer, Hal Willner, very early on in COVID. The filming had stopped and then the Rock and Roll Hall of Fame started [T. Rex was inducted into the Hall in 2020] so I guess the record company wanted to jump on that. For the album, we very quickly made some videos to go with some songs, but always wanted to make a complete film. During the post-production of the film during COVID, though, I did more recording as far as interviews, Gloria Jones did not happen until then, and Richard Barone did not happen until then. John Cameron Mitchell collaborated with me via Zoom. That was late. Bowie and Marc’s publicist Alan Edwards, had always wanted to participate, and that happened during COVID. There’s a lot of very key interviews and even musical moments that happened later, so actually having the break was a good thing because I got to see what was missing.

ES: Gloria Jones [Marc Bolan’s widow]. When I was in post, the editor said to me, you’ve got to get to Gloria. I had spent a lot of time with Rolan, and so it was not that hard to get to Gloria, but once I did — and believe me, a lot is on the cutting room floor — it transformed me and transformed the film, for sure. And those were very intense, very long conversations. There was a lot of laughter, a lot of fun and a lot of tears and I think Gloria’s presence and spirit really took me and the film to another level…Also, I will say that we owe everything to Nick Cave. Nick Cave was a very good friend of Hal Willner. And he asked Hal, I guess, you know, what are you doing? What are you working on? And he said, Oh, I’m going to do this T. Rex project. And Nick said, I love T. Rex, Electric Warrior is my favorite album. And I’m doing “Cosmic Dancer,” if I may. And the contracts were not even finished from the record! A few days later, we’re unofficially in a studio, I got a crew together, and it was because of Nick Cave. In a way, when we got Nick, then we got everybody else, because he is somebody that most, if not all musicians admire and look up to. He’s very special to all of us, especially to me, because I didn’t know the project would ever happen. We needed someone of that integrity and caliber. I would say Nick’s involvement was the most important. And there was that incredible performance!

ES: Yes. I mean, listen, I didn’t know Marc, but there was nothing repressed about him. He’s totally comfortable in his own skin and he used rock and roll to get it out there. There are just people like that. They’re rare. He was an entertainer for sure. But there are very few people where it just comes out of being that natural and also really sexy.

MVTM: The film includes footage from the Marc show [Marc Bolan’s UK television show] and showed how Marc was embracing new bands and new sounds, especially punk. That was great. Were there any sort of surprises there?

ES: What I really loved was that in one show you see the Boomtown Rats and then five seconds later you see disco dancers, and that to me was very emblematic of the second part of the seventies, in which punk rock, disco and pop music all coexisted. And people had to choose their sides, but with Marc, there were no sides. And the fact that he was doing an afternoon children’s variety show was just crazy and, for Billy [Idol], it was a real inspiration in talking about that as well. Also, let’s face it, “Heroes” is one of the greatest songs written and performed, and the fact that David Bowie went to that show to break it really says what he felt about Marc. He could have, at that point, probably gone to a lot of places, and he said, I’m going to do this with Marc, and that is quite special.

Angelheaded Hipster: The Songs of Marc Bolan and T. Rex makes its world premiere at Tribeca Film Festival 2022, and hopefully, you’ll see it at a theater near you very soon.