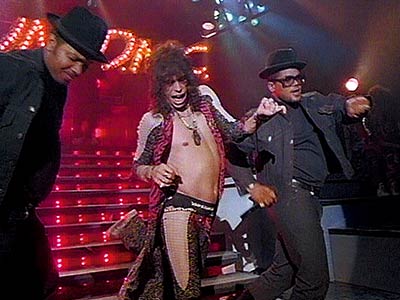 We’re back! THE GOLDEN AGE OF MUSIC VIDEO has partnered with the folks at VEVO (the world’s leading all-premium music video and entertainment platform) through a weekly curation of the 80sOnVEVO YouTube page. Each week, we’ll be dusting off the shelves of the VEVO video vault to spotlight all-time favorites, award winners and lost gems from the decade of decadence. We’ll also supplement that with a rundown and info/commentary about our weekly batch of clips right here. Each week will also have a FEATURED VIDEO as a spotlight for one particular video from the era. So let’s go!

Run DMC & Aerosmith – Walk This Way, directed by Jon Small. Small went through many a challenge to bring this clip to life, including a conversation with Steven Tyler where Tyler had only one request. Read what that request was and more here when Small told the GOLDEN AGE OF MUSIC VIDEO the whole story.

Elton John – I Guess That’s Why They Call It The Blues
directed by Russell Mulcahy, a frequent Elton John collaborator. In fact, the two created one of the first video albums ever, 1981’s The Fox. This video also falls into the short trend for British music videos taking place in a ballroom, along with Wang Chung’s “Dance Hall Days” and the Kinks’ “Come Dancing”.

Tom Petty and the Heartbreakers – Don’t Come Around Here No More
directed by Jeff Stein, whose Alice in Wonderland theme resulted in a clip that MTV censors were afraid would scare children during the cake-eating scene. Stein & Petty teamed up again with a sort-of sequel for the Heartbreakers’ follow-up hit “Make It Better”.

Warrant – Cherry Pie
also directed by Jeff Stein, featuring model Bobbi Brown, who is still poised to publish a memoir that includes insight into her brief marriage to Warrant’s lead singer, the late Jani Lane. Stein came clean on the project, insisting that the video is a joke that no one got.

LL Cool J – Jingling Baby
directed by Paris Barclay, who can be seen at the beginning of this video talking to LL Cool J on a Michael-Douglas-In-Wall-Street-era cellular phone. This video for the fourth single off 1989’s Walking With A Panther features more of LL’s humorous acting chops in this house party clip. Later, Barclay won Emmys for his work on NYPD Blue, currently serves as executive producer for the FX series Sons of Anarchy.

Sade – Smooth Operator
directed by Julien Temple, who told THE GOLDEN AGE OF MUSIC VIDEO why he chose to work with Sade: “Oh, she’s very uncompromising. She was very beautiful. She was interested in jazz which was something that I was getting interested in. I was thinking about making this movie called “Absolute Beginners” which was set in the late ‘50s at the height of the popularity of modern jazz, people like Charlie Watts and the like came from that scene, and she was really exploring music in a way from that angle that I liked a lot. I think she was different from what was going on at that time, but little did I know that it would become the music soundtrack of every dinner party of the 1980s! But at that time, it sounded quite fresh.”

Michael Jackson – Black or White
directed by John Landis, who told us that his main job on this clip was just to keep Michael Jackson from looking like a complete crazy person.

Slick Rick – Children’s Story
directed by Ric Menello (seen here next to Rick in the beard), in which art seems to imitate life. In Stacy Gueraseva’s book Def Jam Inc., she says, “Just like the lyrics in ‘Children’s Story’ — ‘raced up the block doing 83, crashed into a tree near university’ — Rick would be speeding from cops after shooting his cousin. He was caught, and eventually would be going to prison for six years.”

David Bowie and Mick Jagger– Dancing in the Street
directed by Bowie & AC/DC video veteran David Mallet, who completed the shoot at breakneck speed, making up most of the video’s scenes on the spot with the duo on the docks in London. He let us in on the mechanics behind the final shot of the video: “It was summer, and the dawn happened at about 4 o’clock in the morning, and we hadn’t done the last shot. We took every car of every crew member, every single car that anybody owned, and we set them up with their headlights on full, and then shined them into the lens so that made the sky look black so it would match. That’s why you see a bunch of headlights in that shot.”