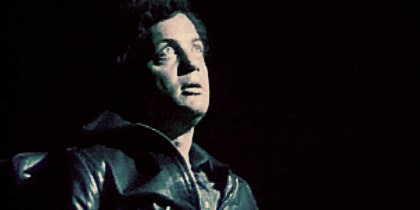 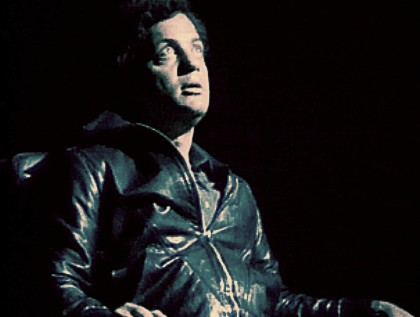 THE GOLDEN AGE OF MUSIC VIDEO has partnered with VEVO (the world’s leading all-premium music video and entertainment platform) with our weekly curation of the 80sOnVEVO YouTube page. Each week, we’ll be dusting off the shelves in the VEVO video vault to spotlight all-time favorites, award winners and lost gems from the decade of decadence. We’ll also supplement the VEVO list with a rundown and info/commentary about our weekly batch of clips right here.

FEATURED VIDEO: Billy Joel – Pressure
directed by Russell Mulcahy. Mulcahy directed several videos for Joel in the early 1980s, including “Allentown”, “She’s Right On Time”, and “A Matter of Trust”. He said that the film “Poltergeist” was among the many film history touchstones for this clip. “That definitely influenced it, with the kid getting sucked into the TV,” Mulcahy said, “very much that little bit of ‘A Clockwork Orange’, with him being brainwashed from the chair, so yes, that was quite cinematic.”

LL Cool J – Going Back to Cali
directed by Ric Menello. The music video world lost Menello just this past week, and his work with the Beastie Boys helped set the tone for their bad behavior that populated the “License to Ill” videos. “Going Back to Cali” was a strange departure from the usual hip-hop videos; shot in black & white and featuring a cameo by Martha Quinn, the clip yielded yet another successful single from the “Less Than Zero” soundtrack. Colin Quinn created a popular parody for his MTV special entitled “Going Back to Brooklyn”.

Motley Crue – Girls Girls Girls
directed by Wayne Isham. This video isn’t so much a classic as it is a legendary shoot; the band and the crew became a traveling party, hitting one strip club after another across Los Angeles and gathering shots. Director Doug Freel served as a cameraman that day, and called it “a nonstop party basically…I only made one of those pit stops. There’s sort of a roving pack that would come – and we didn’t shoot lots of times. We’d go just for the fun.”

New Edition – Cool It Now
“Ronnie, Bobby, Ricky, and Mike” is the hook in this New Edition classic that made it to #4 on the Billboard Singles Chart. The song got a boost recently on the Fox show American Dad.

Lenny Kravitz – Let Love Rule
Directed by Jim Gable. This official version is the second clip shot for this song, with the original video directed by Kravitz’s then-wife, Lisa Bonet. A new video was commissioned for the 20th anniversary remix.

Weird Al Yankovic – I Lost On Jeopardy
Directed by Francis Delia. A classic from the Al collection, poking fun at the game show to the tune of the Greg Kihn Band’s “Jeopardy”. Don’t blink or you’ll miss the cameos by Kihn himself and Weird Al pal Doctor Demento. And be sure to check out the amazing Funny Or Die video for the Weird Al biopic starring Aaron Paul.

ABBA – Super Trouper
Directed by Lasse Hallstrom. A noted Swedish director of films such as The Cider House Rules, Chocolat, What’s Eating Gilbert Grape? and the recently released Safe Haven, Hallstrom directed over twenty music videos for Abba. According to the DVD commentary for Hallstrom’s 2005 film An Unfinished Life, he apparently played ABBA songs on the set as a distraction during a cold night of shooting.

Poison – Talk Dirty To Me
Directed by Doug Freel. Freel said this video was the third one for Poison’s debut album, so it was a make-or-break video for them. Freel conspired with fellow director Jean Pellerin to shoot this video and a Stryper video on the same set in the same 24-hour period because of the tight budget. This video gave Poison their first hit.

Sting – If You Love Somebody Set Them Free
Directed by Kevin Godley and Lol Creme. Godley and Creme were at the forefront of mainstream experimental music videos, but Kevin Godley said the technology was the challenge on this clip. Each member of the band was presented in a different visual manner, which was considered groundbreaking at the time. “That was a weird one,” Godley said, “We weren’t 100 percent sure how we would treat each person’s performance. That was something we looked at when we looked at it in post-production. I mean, the brave thing about that is we elected to do this before digital editing existed, so every single layer of that went down a generation.”

David Bowie – Modern Love
directed by Jim Yukich. This was Yukich’s big break as a director. He was serving as coordinating producer on this live clip, and collaborated with Bowie, who had a few specific ideas about shots he wanted to get. On set, Bowie noted that the clapboard should put Yukich’s name as director instead of his own, resulting in Yukich’s first directorial credit.